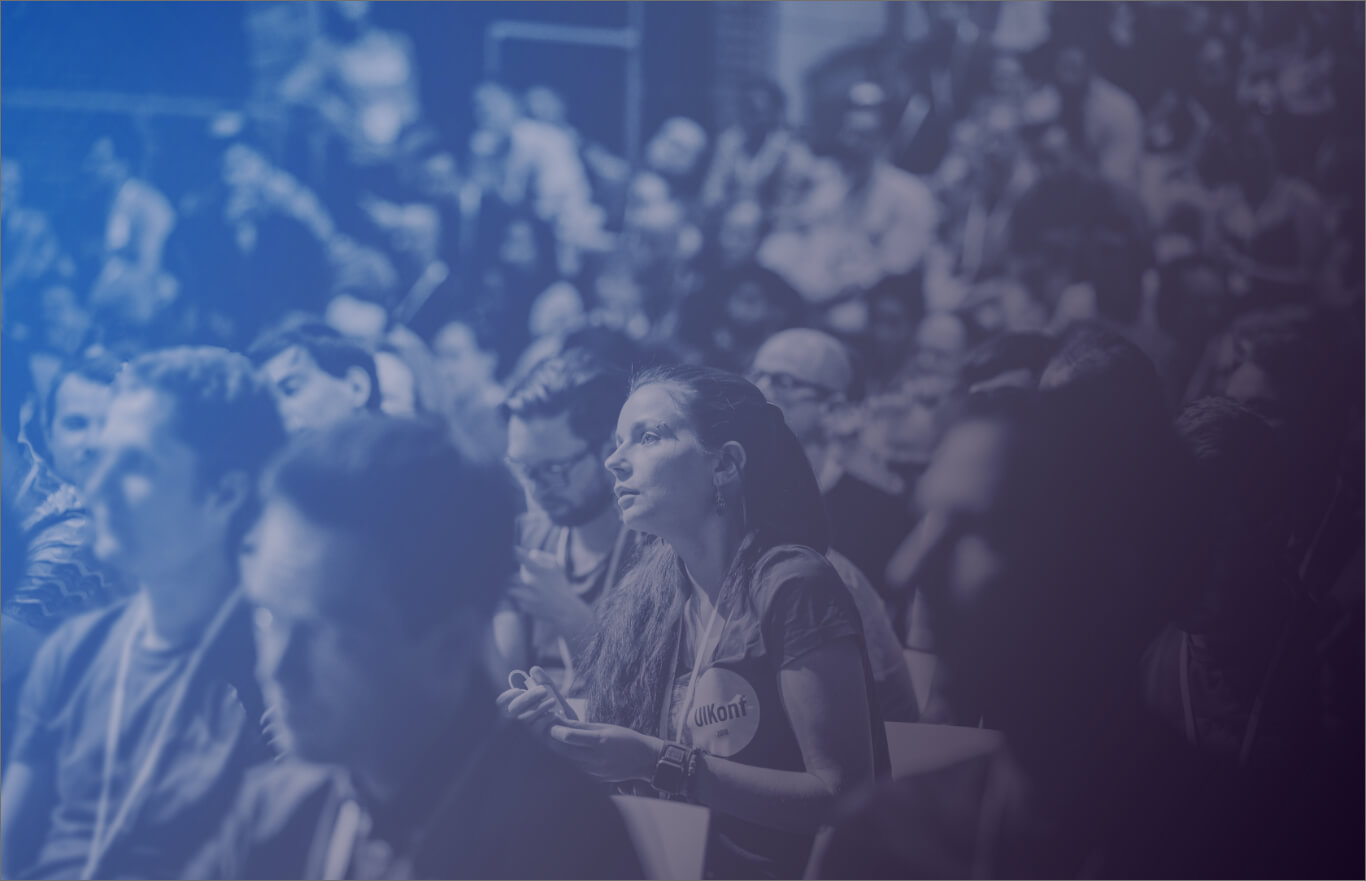 UIKonf hosts a diverse selection of inspiring speakers. We select and invite about half of our speakers. The other half is selected by our community through our anonymous call for proposals system. Details coming soon.

Anouk Ruhaak has a background in political economics and software development. Over the past decade, she developed her research skills as an economic analyst and investigative journalist, worked as a software developer and founded several communities in the tech space. She currently researches and develops data governance models as a Mozilla Fellow embedded with AlgorithmWatch.

Talk: Data Trusts: What, Why, How?
Most apps build today collect data. Data about our health, our whereabouts, our taste, or our social connections. It helps us decide where we want to go and who we want to go with. On a collective level, it can even help us to formulate better public health policies, or climate crises reponses.
But, without proper controls on who can collect, access and use this data, we risk undermining our democratic values and human rights.
In this talk I put forward the concept of data trusts as a way to claw back control over the data collected about us, our processes and environment. I’ll explain what data trusts are and how they are relevant for both mobile developers and society at large.

Chris Eidhof is the founder of objc.io and host of Swift Talk. He co-wrote the books Functional Swift, Advanced Swift and App Architecture. Before focussing full-time on objc.io, he also helped start UIKonf and Deckset.

Talk: Building a Programming Language in Swift
In this talk, we’ll build a very simple programming language in Swift. We’ll look at how to parse text, build a syntax tree, and evaluate the program.

Conrad Stoll is the author of Snowman - a neat little word-guessing game for the Apple Watch that uses CoreML to recognize handwritten letters. He’s a passionate iOS and watchOS engineer that enjoys practicing clean coding techniques and building apps that make people better. As an iOS Engineering Lead at Under Armour, Conrad works to improve and maintain the MyFitnessPal and MapMyRun apps. He’s also known for developing Grocery - a smart shopping list app, and for co-authoring an objc.io article on VIPER.

Talk: State Driven Development - The Beauty of Enums in Swift

Dal Rupnik has been working with iOS since the release of iPhone 3GS and iOS 4. He spent several years working for startups, small companies and contributing to open source projects. In early 2015 he co-founded Blub Blub, and since he has been working on apps that help children with their speaking and language skills. He now works as Chief Technology Officer and helps the company solve all kinds of technical challenges. He loves mentoring engineers and enjoys to see amazing user experience and good architectural decisions in the apps he is involved in.

David Piper is a Software Engineer at adesso mobile solutions, where he develops iOS and Android apps for banks and companies. He currently writes his master thesis, which he will present in his talk. When he is not programming, he writes articles about programming or plays card and board games with friends.

Talk: Visualizing the Structure of a Swift Project

Federico Zanetello is an iOS Engineer with strong passion for Swift, minimalism, and design. When he’s not busy automating things, he can be found writing at fivestars.blog and/or playing with the latest shiny toys.

Gwynne Raskind is an active and passionate contributor to the Swift ecosystem, especially in the Swift on Server space. She has made many integral contributions to the Vapor web framework, and currently develops and maintains end-to-end integrated systems in multiple languages spanning every major platform, including Windows. She also maintains a hobbyist interest in cryptography and infosec, and secretly dreams of one day returning assembly language to the forefront of computing.

Talk: Why Is Swift So Much Better On Server?
Swift is a powerful language, designed and built by experts, guided by an active and invested community of developers. But so many of us have experienced those awkward moments when this amazing new tool faltered, turning brittle and sharp-edged without warning. Must be growing pains, some think. Others accept it as meaning nothing can be good at everything. And still others decide it’s not for them after all. There’s a simple truth they’ve all missed.

(a dramatic pause)
Swift on the desktop can never spread its wings and soar free.
(the theatrical sound of a deep breath)

Come to my talk and learn about the world of Swift on Server, a whole different way of looking at and using the language, unencumbered by decades of habit or by the well-meaning chains of compatibility. Don’t worry for the loss of the crumbling dust of AppKit’s foundations or the wobbling Jenga tower of UIKit, don’t fear the absence of SwiftUI’s still-uncertain rise - watch in wonder as Swift itself is set loose like never before!

Kristaps Grinbergs is an Apple technologies software engineer. Active contributor at Swift Weekly Brief newsletter and open-source projects. Executed as a co-founder at a global-scale company Qminder that serviced clients such as Uber, Lyft, At&T, Bolt, The Olympic Games and more.”

Talk: We need to talk about Websockets

Leah Vogel joined the ranks of iOS developers in 2013 after a long stint as a teacher (mathematics and EFL), and then as a senior project manager at a non profit organization. Her current position is Mobile Team Lead and iOS developer at OrCam Technologies, leading a team that creates applications which interface with smart and assistive devices.
Outside of work, Leah enjoys reading any book she can get her hands on and has recently started playing netball.

Leo Dion runs BrightDigit, a company which specializes in software development in the Apple space: iOS, macOS, and watchOS as well as marketing integration. He has almost 10 years of experience developing in iOS and has been developing in and blogging about Swift since day 1. He lives with his wife Betsy and 5 kids and currently runs the empower.apps podcast on Apple stuff and businesses.

Marin Todorov is a developer, speaker and author. He works for high profile clients most often doing Swift development. Besides crafting code, he enjoys blogging, writing books, teaching, and speaking. He sometimes open sources his code. More about Marin at: www.underplot.com

Talk: Fixing your Combine code with the Timelane Instrument

Matěj Kašpar Jirásek is the lead iOS developer at Futured, pushing the boundaries using Swift. In his years of experience he made dozens of apps. His essential interest is finding the balance between art and technology.

Miriam Busch had been CTO of Karlmax Berlin for more than 5 years, creating and supporting cross-functional teams working with Android, iOS and recently Flutter. In May, she joins SoundCloud as Engineering Manager. Meanwhile, she is staying at home, trying to homeschool her kids and finding some joy in plants and drawing on her iPad.

Talk: Cross-platform Collaboration Patterns
“What do you do professionally?” What is the first thing you’re saying? You’re an iOS developer, a developer for mobile apps or a software developer at $company?
Most apps are built for iOS and Android, most also require a backend. Many teams are set up as feature teams, including developers specialized for their respective platform. Yet, how do they actually collaborate?
We’ll talk about patterns and antipatterns I’ve seen - apps built in isolation to feature parity, from silos to cross-platform pair programming and code sharing.
There is more than one way to collaborate with your peers. Let’s see what is in there for you and your team.

Paul Hudson is the author of Hacking with Swift, Pro Swift, Swift Design Patterns, Testing Swift, Server-Side Swift, Swift Coding Challenges, and more. Suffice it to say, he quite likes Swift. And coffee. (But mostly Swift.) (And coffee.)

Talk: Who can say they have learned Swift?
If someone asked you ““have you learned Swift?”” your initial response might be to say ““yep, I’ve learned Swift!”” And perhaps you have learned some of it – you might be building apps with it every day, you might have read all my Swift books and them some, or maybe you’re even the tech lead on a team of Swift developers.

In this talk I’ll discuss why the constant evolution of the language means we’re still trying to figure out what truly idiomatic Swift looks like, and the ramifications that has for our community.

Peter Mossad has been an iOS developer for more than 11 years. Yes, he started iOS development with the first iOS SDK. Since then he had the chance to work on different domains, solving many problems and built 100+ different iOS / watch OS Apps. Currently Peter is a Senior Engineering Manager at DeliveryHero working with iOS teams, that are building iOS apps for the top Delivery Hero brands delivering around 50 million orders a month, with around 2 million daily active users.

Talk: Conductors: It’s all about communication! We all aim to build scalable, maintainable and robust apps - it’s always going easy till our screens are getting more and more updates and new features. Having one screen that accommodates large number of use cases / features is something that we see in almost every app. I think everyone agrees that building such a screen and keeping it maintainable and scalable is a problem that every mobile developer is facing. In this talk, I will be presenting on how we here at Delivery Hero, are able to solve this problem of massive screens by using Conductors. Join us for further details!

Rob Napier is co-author of iOS Programming Pushing the Limits, and maintainer of the RNCryptor encryption format. Before coming to Cocoa, he made his living sneaking into Chinese facilities in broad daylight. Today, he shapes music over Bluetooth for Logitech, explores old ideas in new languages, and tries to figure out how all of this applies to Swift.

When she isn’t busy trying to train her dogs, Sophie is a Lego architect in the making and an enthusiastic developer of Swift, Python, and Scratch.

Talk: Who can say they have learned Swift?
If someone asked you ““have you learned Swift?”” your initial response might be to say ““yep, I’ve learned Swift!”” And perhaps you have learned some of it – you might be building apps with it every day, you might have read all my Swift books and them some, or maybe you’re even the tech lead on a team of Swift developers.

In this talk I’ll discuss why the constant evolution of the language means we’re still trying to figure out what truly idiomatic Swift looks like, and the ramifications that has for our community.

Thomas Ricouard is a passionate iOS and MacOS developer for more than 10 years. He worked on many products and applications. From Google on Chrome for iOS to currently Glose, a company he co-founded making social network & educational service in the digital book industry. Recently became obsessed with Redux and SwiftUI.

Veronica Ray is a Senior Software Engineer at Compass developing a great search experience for real estate. She previously worked on Video at LinkedIn. She started her career at a startup in San Francisco and now calls New York home. When not writing code she loves indoor bouldering.

Talk: Prepping For a SwiftUI Future
Many of us are excited to adopt SwiftUI in our production apps next year. We might be working on side projects to wrap our heads around this new paradigm. However, at work the situation is more complex. I will show you how to architect your current app for a smoother migration and include real world examples of UIKit/SwiftUI interoperability. You will leave able to lead crucial conversations with your team about what we can do now for a successful migration next year.

Sign up for our newsletter to be informed about upcoming speakers.

We would like to use third party cookies and scripts to improve the functionality of this website.ApproveMore info